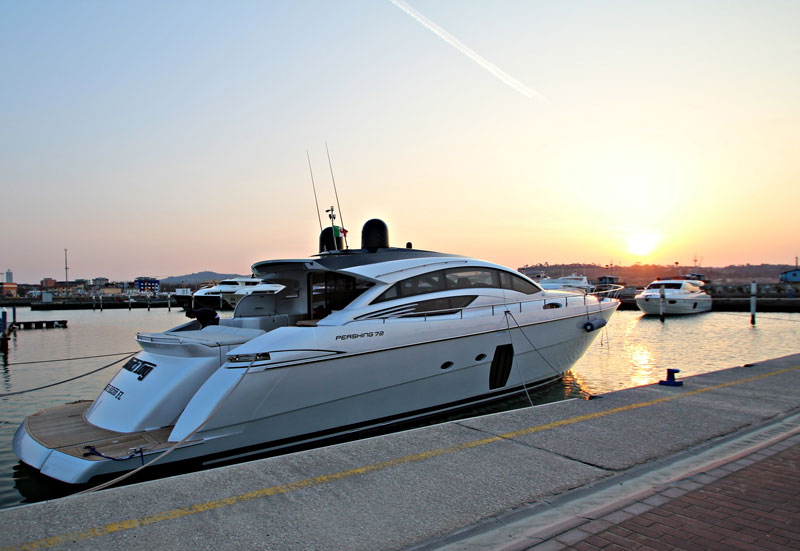 PERSHING 72' dates back to 2007; the new ship owner commissioned CMM Yacht Service all the refitting works and modifications on the watercraft.
After taking several ideas into consideration, the Ship Owner has chosen a major refit. What was the result? A completely repainted yacht, with clear aesthetic modifications especially as for the ship owner's cabin and the substitution of a lot of plants.

The first ship owner's request was to change the external look of the ship with the aim of making the classical colour of Pershing more modern: silver hull, white deck and charcoal strip changed into a new total Champagne Pearl colour.
The need has been duly met, with a few modifications while choosing the colours, though.
Given that the ship had a sports line, the CMM project manager did not recommend just one colour but two of them: hull and deck in pearl white and sundeck and floating line in carbon grey.
Unique colours for this kind of ship, with extraordinary glares when the ship is off shore; so it was easy to persuade the ship owner who immediately ordered the CMM technicians to go on with works.
WORKING PHASES:

The ship owner's intention was to make his cabin larger and brighter, for this reason the panels of the wenge canopy were replaced with mirror panels which are not just important decorative elements but also furnishing elements capable to visually enlarge and make the most of the cabin.
The headboard was coated with pearl white leather and punched with amazing Swarovski pieces as well as the Chaise Lounge and the pouffe, in such a way to improve the harmony of the surrounding rooms.
The manual roller blinds inside the cabin have been replaced with new electric Roman blinds made of silk and linen.
A lot of hi-tech equipment has been added on board: as for audio and video, CMM Yacht Service has worked to create the entire home robotics system on board. In all the cabins and salon the TV-sets have been replaced with latest generation Ultra HD Smart TV-sets and equipped with Apple TV, Blue Ray DVD-players and satellite reception decoders.
All of these apparatuses are controlled by only one remote control programmed by the CMM technicians, which allows to manage the whole system with only one instrument.

Two Raymarine gS plotters, series touch screen 12" and 16" have been installed on the navigation bridge; a full navigation system equipped with a new dual core processor plus another graphics processor permitting ultrafast reliable performance; the existing echo sounder has been supplemented with a latest generation Chirp sounder for a better three-dimensional view of the sea bottom.
The CMM technicians have equipped the ship with a Flyr night vision camera by means of heat detection, controllable both by touch system from the plotter and by means of controller mounted onto the command armrest between the two seats.
The command arm has been redesigned so as to make the installation of the Flyr camera controller and the three joysticks possible: tiller, stern and bow; so as to guarantee a better control of the mooring operations.
In order to permit the ordinary use of the ship in the USA and to avoid the dismantling of the whole installation, the CMM technicians have installed a converter transforming any incoming tension into 220 V 60HZ and another converter turning the socket power into 110 V, so that any kind of American electric household appliances can be easily used.
The technicians have carried out the upgrade of the existing air conditioning system into a tropical air conditioner by supplementing a set of compressors and boosting the fancoils, with extra 45,000 BTU in addition to the existing 72,000 BTU, both in the salon and in the ship owner's cabin.

A further important stylistic element concerns the illuminating engineering and its system based on underwater lights of the Ocean Led RGB type, 40,000 lumens of lighting power, controllable by means of a specific control panel equipped with an "illumination effect" programme giving both pre-established and customised lighting aiming at colour control and light intensity.

CMM has equipped the external area with 26 RGB spot leds controllable by the navigation bridge panel and by remote using IPhone and IPad. The lights are synchronised to the sound of music.

The existing teak table has been replaced with a structurally identical table made by the CMM cabinet makers using resin; then, like the ship, it has been painted in pearl white by the CMM workers.
What can we do when there is no room onboard for fridge/refrigerator? Just using the room available, the CMM technicians have modified the one in the cockpit and have created and installed a fridge suitably conceived for those who have little space. In this way, the area previously prepared for the grill has been optimised.

The cushion upholstery has been entirely replaced with a new one made with "DIAMANTE" fabric ICE colour, square-shaped stitching that is the same used for the new Pershing models, customised with the ship name and embroidered ship model. The bow cushions have been enriched with reclining back and a sliding electric boat awning.

The Pershing 72's owner had chosen a specific type for his boat name but he was not entirely satisfied with it, that is why CMM carried out a study in order to have the most suitable ship name; CMM has taken the owner's passions into consideration: since the ship owner is a great fan of the Ferrari cars, a writing with the same font has been created for his "offshore Ferrari".
The writing with "Red Iron" type has been made with carbon and LED RGB backlighting, fixed commands on the pilot house and remote controlled by IPhone and IPad or remote control.

This will close in 20 seconds